Is it possible to protect yourself from malware? 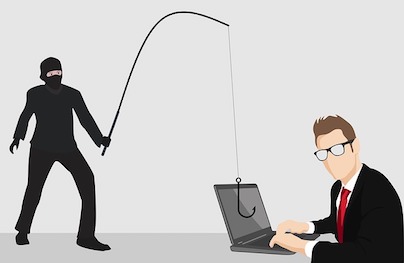 Malware is an abbreviation for malicious software. Basically, it is a software that was made with the intent of gaining access and causing damage to a computer. Sometimes the synonym of malware is a virus, although its just one of the numerous types of malicious programs that threaten security of your device and all of them will be described below.
Adware is the most annoying malware that is designed to unceremoniously display ads on your computer. In order to do it it can analyze the user´s location and inspect which websited the user frequents. By the way, there is another program that helps adware, and it is Spyware that tracks your internet activity in order to send you more advertising. Another malware that can turn your life in hell on earth named as Worm. It replicates itself and its primary function is to infect other computers. By exploiting a network vulnerability, worms deplete system resources such as bandwith and hard drive space. Don´t forget about Trojans, the most dangerous malware program that takes over your computer´s system resources and doesn’t let you get it back. As has been said, a virus is the most common type of malware that executes itself and infects other programs or files on your computer. Also, there are keyloggers that collect passwords and logins saved on your pc and then send them to cybercriminals. Or backdoors that are very similar to worms or Trojans but it gives an intruder access to your computer. This list can be much more extended, but the main message is the following: there are many dangers that eager to steal your data, to show your tons of ads, destroy all the files and programs you have and obstruct the proper functioning of your computer. That´s why so many people want to know which free anti-malware software is the best solution. And based on that, comes up the following question....

How to protect ourselves from malware?

Some people may think that an antivirus solves this issue easily. Well, it depends on what type of antivirus you use, because as we see above, viruses are just the part of the big family of malware. Also, not every antivirus is sophisticated enough to identify the malicious code and eliminate it. For example, AdGuard whose main priority is the security of your personal and financial data has elaborated special filters that protect users from entering malicious and phishing websites where malware is hidden. In other words, it represents as the malware blocker.
How does it work? AdGuard´s protection against malicious websites is based on the filters. At the moment we have analyzed more than 15 millions websites and have about 1.5 million dangerous sites added to our blacklists.
If you have AdGuard for Windows, the program also examines every downloaded object. What’s more, you don’t have to worry about your personal data, because AdGuard for Windows uses the protocol Safe Browsing API version 2.0 that keeps your data safe. We don’t know anything about pages you visit as we use hash prefixes and not opened URLs. If you use one of our browser extensions or AdGuard for Android or AdGuard for Mac, the program scans only those pages that you’re looking through using Lookup APO. When you enter the page, a local client sends the information in a form of hashes and hash prefixes with the backend server. Then the local server gets the response and determines whether the website is safe.
There are two filters that help us. One of them is designed to protect you against phishing and fraudulent pages, and the second one aimed to protect against malicious sites that can lead to virus infection. We have a database which we refill in real time, detecting new malware and phishing websites. If you are concerned about your privacy and security, we suggest you become a member of AdGuard Browsing Security Community. With this module AdGuard won´t let you visit dangerous websites without showing you the warning notification. In the picture below you can see how it works: 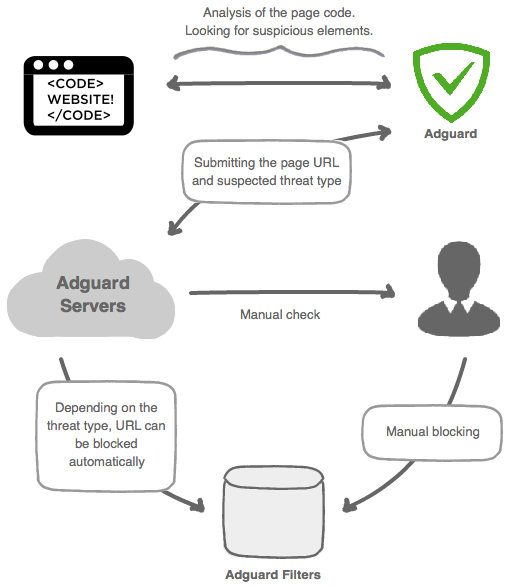